Limited edition artwork by Nelson Mandela, gifted to Liverpool City Council and the Mandela8 group by his eldest daughter, have been put on permanent display in St George’s Hall. 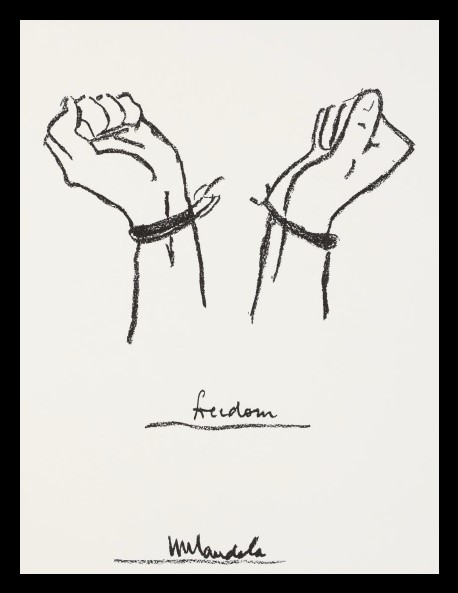 The Mandela8 group was established in 2013 after Nelson Mandela’s passing to establish a permanent memorial and educational programme as a fitting legacy. The memorial will be installed in Princes Park and officially opened in 2019.

Earlier this year representatives from both Mandela8 and Liverpool City Council visited South Africa to share the designs for the memorial with the Mandela family and were delighted to return to Liverpool not only with the blessing of Nelson Mandela’s eldest daughter Dr Makaziwe ‘Maki’ Mandela for the designs, but the beautiful gift of the limited edition ‘Struggles Collection’ prints.

It is without question that such a significant gift needs to be shared and be accessible to all who wish to see it so the prints are now permanently displayed in St Georges Hall.

“Going to South Africa and meeting the Mandela Family was a privilege and an honour. For the family to give us their blessing for the memorial design was incredibly exciting. Then for the City of Liverpool to be gifted these amazing prints was something we didn’t expected and were deeply humbled by.”

“The images and messages in these prints will have a strong resonance with many in our city, who will not only have supported the Anti-Apartheid movement over many years, but will have been engaged in their own struggles for justice and fairness. It’s an honour to have been part of bringing them to Liverpool”

Sonia Bassey, Director and one of the founding members of Mandela8 said:

“The significance of ‘The Struggle’ prints being displayed in St Georges Hall in Mandela’s centenary year is huge. This artwork is not only the first Black artwork to go on permanent display in such a significant venue in the City, but it is Nelson Mandela’s, the most significant global leader of our time”.

“St George’s Hall is delighted to receive the works of Nelson Mandela to be on permanent display at the hall, and, following on from Nelson Mandela being awarded the Freedom of the city, the works go a long way in enhancing a new narrative for the city and its key venues of being truly multi-cultural and inclusive.”

The Africa Oyé festival is the biggest free celebration of African and Caribbean music and culture in the UK, taking place every June in the picturesque surroundings of Sefton Park in Liverpool. Having grown from humble beginnings in 1992 as a series of gigs in the city centre, Oyé now attracts crowds of over 50,000 people from all over the world each year.

2017 was Africa Oyé’s 25th Anniversary Year and saw a whole host of events programmed around the annual festival, under the ‘Oyé 25’ banner. Oyé was also shortlisted for Promoter of the Year at the 2017 UK Festival Awards.