Whilst many of us are taking steps to move out of lockdown and back into reality, many of our older neighbours this is still a time of increased isolation. Local charity Liverpool Cares is running the Phone a Friend programme, providing company and conversation to older neighbours over the phone, and it’s proving to be a lifeline for people across the city. 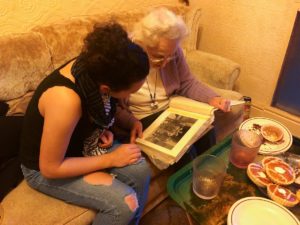 Liverpool Cares is a charity that connects younger and older neighbours to one another for support, fun and friendship, with an aim of reducing the loneliness and disconnection in the city.

In normal times, one of the ways they do this is through their Love Your Neighbour programme, which brings together older and younger people to share time and friendship one-to-one, often in people’s homes. Friends share meals, games, company and companionship, bringing a little of the outside world in for people who can struggle to get out. Now that all of us are more physically distant, these relationships have moved onto the phones. Long-standing friends are calling one another regularly, on the phone or FaceTime.

The pandemic has meant that there are more people than ever in need of this service, so Liverpool Cares is also busy making new matches between younger and older neighbours. Those matched through the Phone a Friend project scheme will speak often for the duration of the crisis.

One of the older neighbours receiving regular calls is Marjorie, 71, who said, “I’m so grateful for your call. It’s so nice to know that younger people are giving their time to people that need it. I really appreciate all of the support”

Right now there are older neighbours waiting to be matched to a friend. If you could spare just an hour a week, Liverpool Cares would love to hear from you.

If you have just one spare hour a week, to make a difference in the life of an isolated older person enquire about the Phone a Friend programme now via the Liverpool Cares website. After you complete your details a member of the team will get in touch.