This Easter, as Liverpool begins its partnership with Unicef to become a Child Friendly City, a dedicated collective of voluntary organisations is welcoming Liverpool children to 54 fully funded play schemes across the city. Upwards of 2,000 children per day have the opportunity to enjoy themselves in safe, enriching environments during the school holidays, thanks to the Positive About Play initiative. 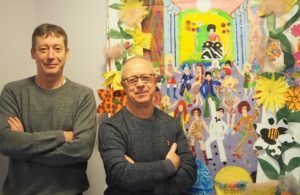 Organisations including Bluecoat, The Inclusion Network, Liverpool North Central Methodist Church and many others opened the doors to their play schemes on Monday 8th April, in an operation coordinated by Liverpool Play Partnership.

The Play Partnership was established in 2012, in response to reductions in Government funding and a lack of budget for local play schemes. Led by LCVS (Liverpool Charity and Voluntary Services) and Merseyside Play Action Council (MPAC), the partnership has ensured a cost-effective, collaborative approach to play scheme delivery, city-wide, for the past six years, and has been supported by the John Moores Foundation, the Youth and Play Service, the Mayor’s Hardship Fund and the Community Fund for Merseyside and Lancashire, amongst others.

Child engagement has grown steadily, year on year, thanks to support from a range of public and private sector funders. The play schemes meet vital needs for children from all communities throughout Liverpool, including some of the most deprived areas in the country. As well as sporting, craft and other activities, teams of staff and volunteers also provide meals and snacks every day, ensuring that children, including those who usually receive free school meals, are provided for during the break. Throughout the 2018 summer holidays alone, Positive About Play clocked up 8,000 volunteer hours and served 48,000 meals and snacks.

With public sector funds increasingly stretched, the future of funding for Positive About Play is far from certain but Mayor Joe Anderson has put ‘investing in children and young people’ as the number one aim in the city’s Inclusive Growth Plan and LCVS is currently working with Liverpool City Council to develop a children’s play strategy that will support the goal of investing in children and young people, as set out in the plan.

On the Easter play schemes, Kevin McIntyre of MPAC said, “Huge numbers of staff and volunteers from non-profit organisations have got off to a great start this Easter holiday and 54 play schemes are currently in full swing. At MPAC, we’ve been hard at work since the last play schemes during the February school holiday, ensuring that the people who run these schemes have the funds, supplies and support they need to provide continuity of service.

“We’re pleased to have secured a number of additional organisations to donate their time and enrich the experience for the children. Amongst others, Big World Treks is teaching woodcraft at a number of schemes, Creative Encounters is leading theatre workshops and The Windows Project is delivering writing workshops. I’d like to take this opportunity to thank everyone that volunteers their time to make these play schemes happen.”

The Positive About Play initiative is monitored and evaluated following every play scheme period. After the February scheme, Hebden Area Children’s Group reported ‘We have a lot of families that can’t afford to go anywhere plus have been hit hard by the changes to universal credit. One mother says she doesn’t know how she would manage to feed her child if it wasn’t for the help she received from the group and meals he has when he is with the group.’ Similar sentiments were reported by other schemes.

Colin Heaney, co-Chief Executive of LCVS said, “Merseyside Play Action Council does a fantastic job of managing the play scheme provision for Liverpool and ensuring that article 31 of the UN Convention is upheld in our city. Article 31 states that ‘every child has the right to rest and leisure, to engage in play and recreational activities appropriate to the age of the child and to participate freely in cultural life and the arts’. This is the core principle of Positive About Play.

“Ensuring that Positive About Play continues to have the funds it needs is an ongoing project. We manage a central pot, in which those who wish to help uphold the ‘right to play’ of Liverpool children can pool their resources to do just that, in an efficient way that works in close partnership with grass roots community organisations.”